by Dinesh Bareja
in India Unplugged, IW Hall Of Shame, Maps of India
0 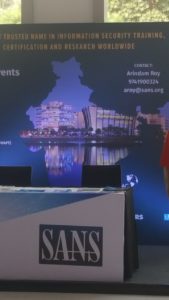 Yesterday, October 27, 2017, I came face to face with the i-am-superior attitude of a multinational company based on their money clout and local impotence – At the BSides conference in New Delhi, SANS had put up a stand selling their training programs. In the backdrop they had put up a big poster with a misrepresented map of India – which is a crime and an insult to the country!

The map did not show the country as a whole and they had cut off the top part of Jammu & Kashmir (J&K). Any map in India MUST show the country as a whole and many maps show a dotted line which represents the Line of Control. At no time has India said that the territory beyond the LOC is not ours and thousands of Indians have died for this cause. It is an insult to the country and the sacrifices of these countrymen to show the state of J&K with territory lopped off!

When I reached the venue, around 10.00 / 10.30am, the first thing that caught my eye was this insulting map and I was outraged, personally speaking. I was also shocked to know that they had put up this big backdrop with an offending representation of the country’s national boundary, and no one had objected.

So I went up to the stand told the guy to take it down. I also asked him how come he did not see this mistake and he says “I did not notice” – what a loser who does not deserve to be called an Indian or an educated Indian – Wearing a suit, with his educated airs and degrees this worm cannot recognize the map of his own country! This is the type of people who can be called a disgrace to the country!

He said he has to talk with his boss and went on the phone – about half an hour later I saw him paste an A4 sheet of paper on the top of the map (that can be called a shitty excuse of a coverup) which was like adding insult to injury.

Some time later they replaced the white A4 sheet with another sheet which may have been their brochure but it looked bigger than the A4. Then later in the day (I don’t know when) they placed a standee in front of the map to cover it (the second picture). I did not take pictures of the stall in these interim periods as I did not want to be a pain and expected them to do their bit in the national spirit.

Around 12 or 1 pm the country head of SANS (Arindam Roy) comes up to me and has a pretty drawn out conversation which I am putting below, as I remember:

I turn to my friend with whom I was having a conversation and this guy changes track and reveals his sleazy side and demonstrates his (and SANS) attitude of money power and the F.U. thinking…

I cannot but look at this guy and his cheek – he sleazily just propositioned me with a the promise of referenced business – I am like WOW. He has a very low opinion of me or I am looking like a whore! I am like – this guy has just got an earful of abuse from me for his apparent ignorance of the insult to his own motherland (I just cannot believe he did not know about the incorrect map) and he is trying to bribe me. This guy knows every move he is making and is just as dirty a salesman as any.

He cares a shoot (or a flying F***) for anyone, anything or country so long as he sells.

I am dead sure that when he waddled off with my business card, he was patting himself thinking “cool, le liya – now it’s all closed, now I have Dinesh in my pocket too. Will send him a reference sometime and he can fight it out. Now he will shut up as I will be his sponsor” Oh no MR ROY you have got it all wrong ! This was the dirtiest assessment of myself and I haven’t felt so violated ever. Everyone is not out being a whore in this country – you think you can just walk up to me and say a few words and expect me to lap it up because you have a BIG name amrikan company behind your ass.

And that’s when I got so badly pissed with this twerp and his big bucks attitude that I decided that I am going to put out all his shit on my network.

People who I know MUST know this and these seditious country managers must learn about the map, the flag and the boundaries of the country they live in and call their own. Not just be the lackey of the global company they are representing. History has numerous examples of lackeys who sold the country down the drain and the British ruled us centuries – now this!

Bottom Line – #BoycottSANS or you need to apologize to the country #SANSMustApologizeToIndia.

(of course neither you nor your lackeys will understand the pride, emotion, sacrifice and pain enshrined in these two words)

PS: I don’t believe your lackeys did not know that the map of India is wrong and they thought who f****** cares. No one did care until I came along. Then they lied about the artwork coming from USA – bullS*** this was made here and I bet all the collateral is made here.